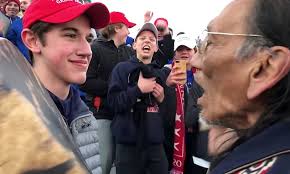 Nicholas Sandmann, a student at Covington Catholic High School, tweeted that the news outlet had settled the defamation lawsuit on Friday, which also happens to be his birthday.

Sandmann filed lawsuits against the Post, CNN and NBC after claiming the outlets vilified him following his stand-off with Nathan Phillips, an American Indian activist, at the Lincoln Memorial in Washington in January 2019.

He went on to thank his attorneys and those who supported him in filing the lawsuit.

'Thanks to @ToddMcMurtry & @LLinWood for their advocacy. Thanks to my family & millions of you who have stood your ground by supporting me. I still have more to do,' he said.

Sandmann did not reveal what the settlement was.

He settled a lawsuit with CNN in January for an undisclosed amount.

Sandmann and his family were seeking combined damages of more than $525 million against the outlets.

The teen claimed the outlets had falsely conveyed to viewers and readers that he was 'the face of an unruly mob' facing off against Phillips during protests at the memorial while he was in Washington DC on a field trip.