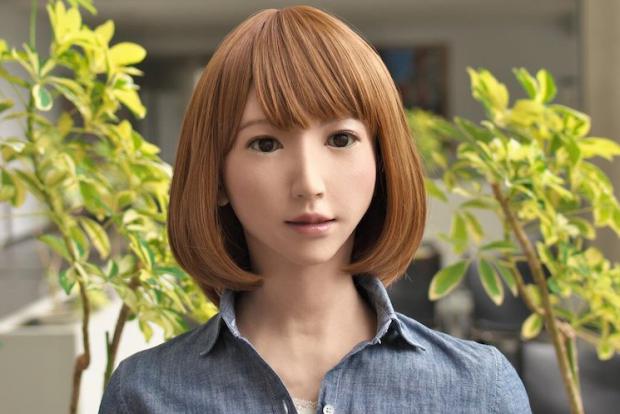 "What kind of apple is that?" asked the 23-year-old with blunt bangs and big brown eyes peering at him through his laptop screen.

Helderman, the chief executive of BondIt Media Capital, was meeting with the leading lady of "b," the $70 million sci-fi film his company is backing.

Only the actress, Erica, was not, in fact, a woman but an android. Though her curious eyes were trained on Helderman's face, the giveaway was a faint whirring when she rose from her chair.

Erica was created by Hiroshi Ishiguro, a roboticist at Osaka University in Japan, to be "the most beautiful woman in the world" — he modeled her after images of Miss Universe pageant finalists — and the most humanlike robot in existence. But she's more than just a pretty face: Though "b" is still in preproduction, when she makes her debut, producers believe it will be the first time a film has relied on a fully autonomous artificially intelligent actor.

Yet despite her flawless features and easy smile, her pupils are clearly plastic. Her synthesized British voice has a slight metallic tone that sounds like she's speaking into a pipe. When she walks, the motion of her air compressor joints makes it look as though she's performing either a sped-up or slowed-down version of the robot. For that reason, a majority of her scenes will be filmed while she's sitting down.