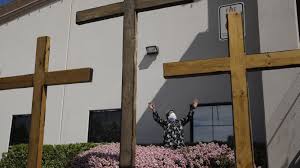 Supreme Court Justice John Roberts is facing backlash from conservatives after siding with the court's liberals in a ruling allowing Nevada to cap church attendance at 50 people, while movie theaters and casinos are allowed to host hundreds of patrons.

Roberts joined a 5-4 majority in Friday's ruling that denied a rural Nevada church´s request late Friday to strike down as unconstitutional a 50-person cap on worship services as part of the state´s ongoing response to the coronavirus.

The high court refused to grant the request from the Christian church east of Reno to be subjected to the same COVID-19 restrictions in Nevada that allow casinos, restaurants and other businesses to operate at 50 percent of capacity with proper social distancing, even if their normal capacity is in the hundreds or thousands.

Calvary Chapel Dayton Valley argued that the hard cap on religious gatherings was an unconstitutional violation of its parishioners' First Amendment rights to express and exercise their beliefs.

Roberts, appointed by President George W. Bush, was slammed by Republicans, who accused him of forsaking religious liberty.

'John Roberts has abandoned his oath,' tweeted Texas Senator Ted Cruz. 'But, on the upside, maybe Nevada churches should set up craps tables? Then they could open?'