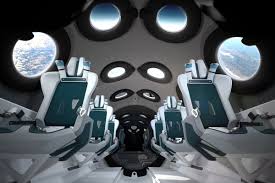 The elegant interior is fitted with 12 cabin windows positioned on the upper side and roof sections of the spacecraft, through which customers will be able to observe the Earth's surface as it slips beneath them.

Upon launch and during landing, passengers will be buckled into specially designed seats, each of which is tailored to the individual customer. All of these costly astro-thrones were constructed with high-grade aluminium and carbon fiber, and accentuated with engineered foam before being covered by "technical fabrics" designed by Under Armour.

According to Virgin Galactic, during high G-force sections of the flight, the positions of the chairs will be controlled in part by the pilot to ease the physical stress on passengers. Upon achieving weightlessness, the empty seat – free of its now-weightless passenger – will recline to give the crew as much space as possible.

Each seat is also fitted with a personal digital display that feeds the passenger data throughout the flight, and connects them to the pilots of the VSS Unity.he SpaceshipTwo interior was designed in in collaboration with London design agency Seymourpowell, with input from doctors, astronaut trainers, pilots, engineers and future customers.