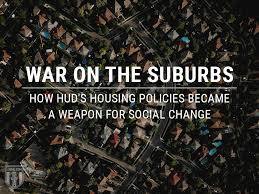 There are few things more synonymous with the American way of life than the suburbs. While certainly not without problems, the suburbs have been home to middle class Americans since the end of World War 2, and even before. But the suburbs are under attack from certain elements of the left as a source of social inequality and (what else?) "white privilege" and "white supremacy."

If you are alarmed by this article, that's a good thing. Because these elements of the American left seek nothing more than the total destruction of your way of life, from the people who live in your communities to the types of houses that you live in to the places where you will be allowed to shop and how you get from one place to another.

The policy is called Affirmatively Furthering Fair Housing (AFFH), but beyond this specific HUD policy, there's a philosophical and political attack on suburbs that goes well in excess of any single policy. There is, without mincing words, a War on the Suburbs in America. It is a war not against a geographical location or a type of housing or community, but an attack on a way of life.

What Is Affirmatively Furthering Fair Housing?

Most people are aware of the existence of the Department of Housing and Urban Development, but don't think much about it. However, HUD has a lot more ambition than you might think: Under the Obama Administration, they made it their mission to radically change the makeup of America by attacking the suburbs.

AFFH isn't just a program. It's a directive and a sort of raison d'etre for the entire Department. Effectively, the program requires any town or other jurisdiction receiving federal housing funds to keep track of statistics with regard to race, disability, familial status, economic status, English proficiency, and other categories. Any discrepancy between the community's records and those of targets set by the federal government is considered evidence of discrimination and funds might be withheld.

AFFH isn't just "social engineering." It is a profoundly totalitarian system that forms the bedrock of HUD's war on the suburbs.

While the alleged inspiration for this is – what else? – "equality (of outcome)," the truth is much more hard nosed. The War on the Suburbs serves the dual purpose of both punishing those who do not kowtow to the totalitarian aims of the Democratic Party as well as further atomizing these communities, breaking them up, urbanizing them and making them easier prey for big business and big government alike.

52% Of Millennials Live With THEIR PARENTS! - This CANNOT End Well!