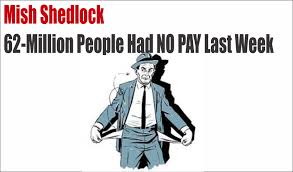 I created the above chart from Household Pulse Surveys by the Census Bureau.

Here are more charts I made from the survey data.

62.173 million people were not retired and received no pay. 4.293 million said they did not want to work.

Those with no pay but were not retired bottomed on June 23 at 55.780 million.

Some people who are retired still want to work at least some hours.

130.003 million people received pay in the reference week. The number of people employed peaked at  134.855 million for the survey ending June 16.

117.952 million people did not work in the reference week.

Some people who are retired still want to work at least some hours.

87.333 million people expect an income loss in the next four weeks. Income loss is by household, not individually.

Paying the Price for the Free Stimulus Money