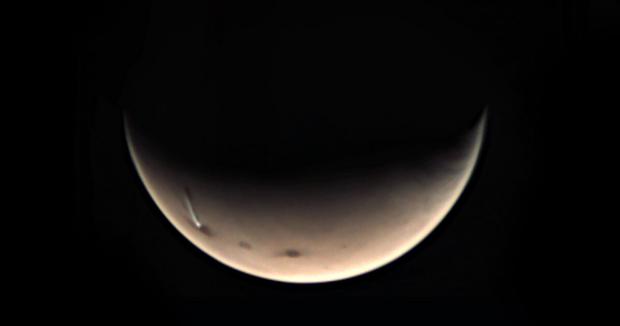 Scientists say a mysterious giant cloud hanging over the surface of Mars which was first spotted in 2018 has recently reappeared on the Red Planet.

Made of water ice, the elongated cloud sits 12.4 miles above the volcano Arsia Mons and stretches some 1,110 miles in length.

Scientists have coined the formation the 'Arsia Mons Elongated Cloud' (AMEC) and noticed it seems to appear around Mars's southern summer solstice – when the southern hemisphere is hit with a large amount of daylight.

However, experts are not clear why it has formed, how long it will stay or when it will disappear from the Martian atmosphere.

The cloud was spotted in images of Mars taken July 17 and 19 by the Visual Monitoring Camera (VMC) onboard the European Space Agency's (ESA) Mars Express.

Jorge Hernandez-Bernal, PhD candidate at the University of the Basque Country (Spain) and lead author of the ongoing study, said: 'We have been investigating this intriguing phenomenon and were expecting to see such a cloud form around now.'

Watch live: Virgin Galactic is unveiling the interior cabin of its SpaceShipTwo rocket...