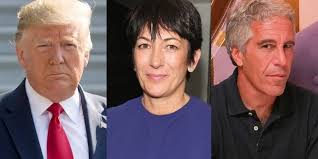 During an interview with Axios, President Trump questioned whether Jeffrey Epstein actually killed himself, while also reiterating that he didn't want to see Ghislaine Maxwell die in jail.

Trump previously faced criticism from the media about him wishing Maxwell well, but clarified again that he simply meant he did not want to see her killed or commit suicide before her trial.

"Her boyfriend [Epstein] was either killed or committed suicide in jail. She is now in jail. Yeah, I'd wish her well. I'd wish you well. I'd wish a lot of people well. Good Luck. Let them prove somebody was guilty," Trump said.

"Her boyfriend died in jail and people are still trying to figure out how did it happen, was it suicide, was he killed? And I do wish her well, I'm not looking for anything bad for her," he added.

When previously asked about whether Maxwell would name high profile people connected to Epstein's sex trafficking ring, Trump said that he hadn't been following the case closely.

However, during a 2015 interview Trump described Epstein's infamous 'pedo island' as an "absolute cesspool," accusing Prince Andrew of visiting it many times.