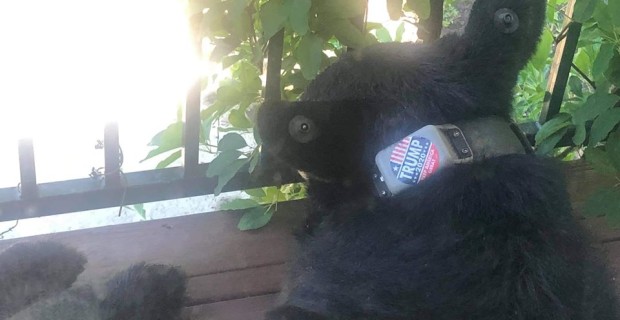 A $5,000 dollar reward is being offered to identify the culprit who put a 'Trump 2020' sticker on a bear's collar in North Carolina.

Local activists in Asheville were apparently "outraged" at the sight of the sticker, which was seen on the collar of a black bear.

Sheila Chapman took a photograph of the bear on her North Asheville front porch after noticing the sticker and asserted that such treatment was "cruel and inhuman," adding that it was "not OK."

With the dangerous criminal who committed this horrific act still presumably on the run, "Help Asheville Bears" (HAB) is now offering a $5,000 reward to anyone who can identify the suspect.

HAB says that this is not the first time someone has placed a political sticker on a bear in the area. Apparently, the shocking act is part of a disturbing trend.

"Whoever placed the illicit sticker had better get out of moonbattery-addled Asheville," writes Dave Blount. "If caught, the perpetrator is as likely to get a fair trial as Derek Chauvin."