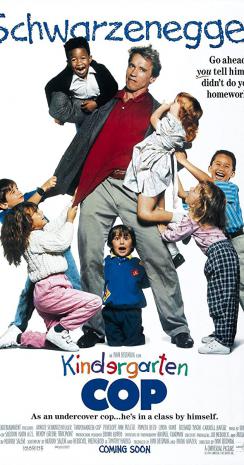 It's come to this: Kindergarten Cop, a banal 1990 comedy-action movie starring Arnold Schwarzenegger as a police detective who masquerades as a teacher, has been canceled and likened to the explicitly racist silent film Birth of a Nation.

In an email to Willamette Week, Leveen likened the Schwarzenegger vehicle to Birth of a Nation and Gone With the Wind:

It's true Kindergarten Cop is only a movie. So are Birth of a Nation and Gone With the Wind, but we recognize films like those are not 'good family fun.'…They are relics of how pop culture feeds racist assumptions. Because despite what the movie shows…in reality, schools don't transform cops. Cops transform schools, and in an extremely detrimental way.

The Northwest Film Center wouldn't tell the Willamette Week's Matthew Singer "how much influence Leveen's comments had on its decision, but the organization did respond to her tweets directly in announcing the cancellation." Kindergarten Cop has been replaced by a second showing of John Lewis: Good Trouble, a documentary about the recently deceased congressman and civil rights leader. Other films in the series include Fast Times at Ridgemont High, Creature from the Black Lagoon, Xanadu, Pee Wee's Big Adventure, and The Shining.