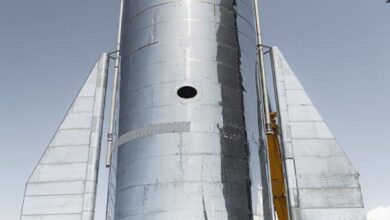 SpaceX's latest Starship prototype had another false start Tuesday morning, as a test "hop" of the next-generation rocket was aborted before ignition.

This follows an earlier attempt, Monday evening, in which the engine of the SN5 test model failed to ignite.

Though the roughly 9-story-tall test craft is designed for orbital flight, it'll make an attempt at what amounts to slowly rising in the air to about 150 meters (492 feet).

According to airspace closures issued by the FAA for the area, the hop could still happen Tuesday anytime before 6 p.m. PT.

You might recall that an earlier test craft called "Starhopper" performed such a short flight last year.

On Thursday, crews at the SpaceX development facility in Boca Chica, Texas, completed a successful static fire of the prototype's raptor engine, clearing the path for a hop attempt.

Phosphine in Clouds of Venus Could Be Signs of Life