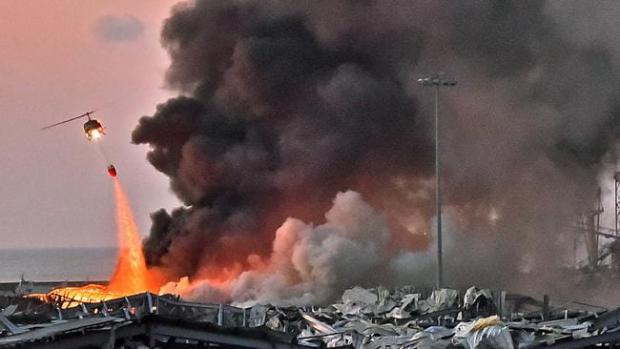 I eyeballed the big Beirut explosion and thought it was 1000 tons of explosive, however, it was 2750 tons of Ammonium Nitrate.

Lebanese Prime Minister Hassan Diab said an estimated 2750 tons of ammonium nitrate had been stored at a warehouse for six years. Buildings as far away as 10 kilometers from the site of the explosion were damaged. Windows were broken throughout Beirut. The blast registered as a 3.3 magnitude earthquake, the U.S. Geological Survey said.

Ammonium Nitrate is an ingredient in fertilizer – and some bombs.

The chemical has been behind several explosions in the past, both accidental and deliberate.

It was used in a terror attack in 1995 in Oklahoma City – the worst domestic terrorism on US soil. An extremist, Tim McVeigh, created a bomb of ammonium nitrate, diesel fuel, and other chemicals.

Latest reports are that
1.. There was a confiscated shipment of 2750 tonnes of ammonium nitrate stored in the warehouse for the last 7 years. Just sitting there.
2.. There was a large shipment of fireworks stored next to it.
3.. The fireworks caught fire, that was the initial fire, which was itself pretty big.
4.. Then the ammonium nitrate detonated.

Calculating the yield based just on the fertilizer gives about a 2 kiloton yield.

This is just clearly wrong. Mushroom clouds form in all explosions — they just stick around a lot longer for big ones. You can tell from the color of the explosion (deep red/orange) that it is not hot enough to be nuclear (which always starts white/yellow, even small nukes). https://t.co/Kp4b8HlgZe