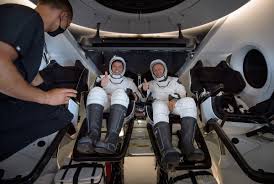 "One person who will particularly benefit from Behnken's knowledge: astronaut Megan McArthur, who is slated to make the same voyage in the spring of 2021 on the same spacecraft, and is Behnken's wife."

SpaceX's crewed capsule isn't called Dragon for nothing. The two NASA astronauts brought back to Earth on Sunday said they felt they were inside the belly of a beast as it careened into the atmosphere at 17,500 mph.

The thrusters were firing to keep the capsule, called "Endeavour," pointed precisely at its target site off the coast of Pensacola, for the first water landing by a US spaceship since 1975.

"The atmosphere starts to make noise, you can hear that rumble outside the vehicle and as the vehicle tries to control, you feel a little bit of that shimmy in your body," continued the 50-year-old.

"It doesn't sound like a machine, it sounds like an animal coming through the atmosphere with all that all the puffs that are happening from the thrusters and the atmospheric noise," he added.