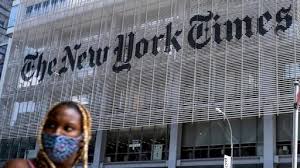 The newspaper group said it had net profit of $23.7 million, or 14 cents a share, in the quarter, down from $25.2 million, or 15 cents a share, in the year-earlier period. Adjusted per-share earnings came to 18 cents, ahead of the 3 cents FactSet consensus. Revenue fell 7.5% to $403.8 million from $436.3 million, but beat the $390.0 million FactSet consensus. "We believe that the significant growth over the last several years in subscriptions to our products demonstrates the success of our "subscription-first" strategy and the willingness of our readers to pay for high-quality journalism," the company said in a statement. New York Times added 493,000 net new subscribers to its core news product in the quarter, and 176,000 additions to other digital products for net new digital additions of 669,000. At quarter-end, it had 5.7 million digital-only subscribers and 6.5 million total subscriptions, said CEO Mark Thompson, who is handing the reins to COO Meredith Kopit Levien in September. Advertising revenue fell 43.9% in the quarter, while subscription revenue rose 7.5% and other revenue fell 5.0%. Digital ad revenue fell 31.9%, while print ad revenue was down 55%. "Print advertising revenue decreased as the COVID-19 pandemic further accelerated secular trends, largely impacting the entertainment, luxury, and technology categories," said the statement. The company is expecting subscription revenue to rise about 10% in the third quarter, while digital-only subscription revenue is expected to rise about 30%. Ad revenues are expected to decline about 35% to 40%, with digital ad revenue expected to fall about 20%, mostly due to the pandemic.

The Best Selling Vehicles In America, By State

UK Has Ten Days To Save Christmas, Retail Sector Warns