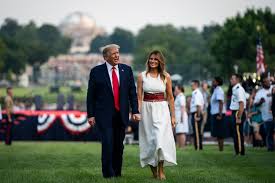 The decision to stage the most high-profile political event of Trump's reelection campaign at the national seat of presidential power would be just the latest break by Trump in presidential norms, which have historically drawn clear lines between official business of the president and campaign events.

People involved in the planning said that no final decision had been made on the location of the Republican convention's celebratory events. Trump abandoned plans to hold the full convention in Charlotte, and later Jacksonville, Fla., over concerns that large crowds could spread the novel coronavirus.

The South Lawn, which can be subject to intense heat and afternoon thunderstorms in late August, is one of several sites under consideration for the week of festivities, including the Trump International Hotel in the District of Columbia, which the president leases from the federal government, officials said. Any costs incurred by the government to host the events would be repaid, said the Republican, who, like others, spoke on the condition of anonymity to discuss internal deliberations.