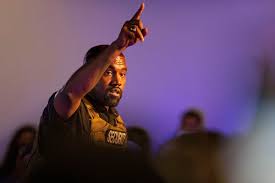 The connection raises questions about the aims of the entertainer's effort and whether it is regarded within the G.O.P. as a spoiler campaign that could aid President Trump, even as those close to Mr. West have expressed concerns about his mental health as he enters the political arena.

One operative, Mark Jacoby, is an executive at a company called Let the Voters Decide, which has been collecting signatures for the West campaign in three states. Mr. Jacoby was arrested on voter fraud charges in 2008 while he was doing work for the California Republican Party, and he later pleaded guilty to a misdemeanor.

Mr. Jacoby, in a statement, said his company was nonpartisan and worked for all political parties. "We do not comment on any current clients, but like all Americans, anyone who is qualified to stand for election has the right to run," he said.

New York Magazine reported Monday evening on the campaign's links to two other people with partisan ties. One is Gregg Keller, the former executive director of the American Conservative Union, who has been listed as a contact for the campaign in Arkansas. Mr. Keller, who did not respond to a message seeking comment, is a Missouri-based strategist.