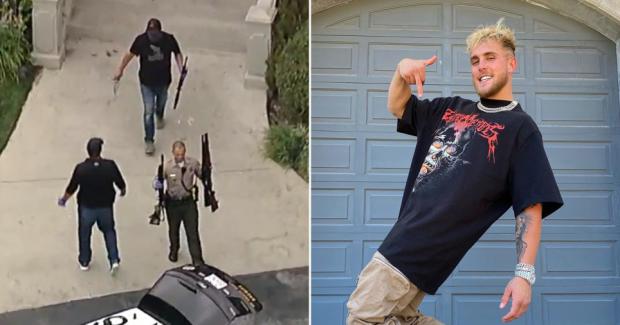 Multiple high-powered firearms were seized at YouTube star Jake Paul's Los Angeles home on Wednesday during an FBI investigation in connection to his arrest during an Arizona mall looting in May.

Heavily-armed agents dressed in tactical gear descended on the $6.9million property in military vehicles around 6am local time after executing a sealed search warrant, TMZ reported.

Aerial footage of the raid, taken by ABC7, showed law enforcement officers walking out of the sprawling Calabasas mansion with several rifles in hand, before loading them onto police vehicles as apparent evidence.

A second FBI raid was also conducted at a separate property belonging to fellow social media personality and friend of Paul, Armani Izadi in Las Vegas, the outlet said. Izadi was also arrested during the looting in Arizona.

In June, Paul was charged with criminal trespass and unlawful assembly by authorities in Scottsdale, Arizona who say they were sent 'hundreds of tips' claiming Paul was 'a participant in the riot.' The case against both Paul and Izadi was later dropped by the City Attorney ahead of Wednesday's raid by the FBI.

In a statement the Scottsdale Police Department said: 'It is in the best interest of the community to dismiss misdemeanor charges without prejudice so that a federal criminal investigation can be completed. Scottsdale retains the option to refile charges depending on the outcome of the federal investigation.'