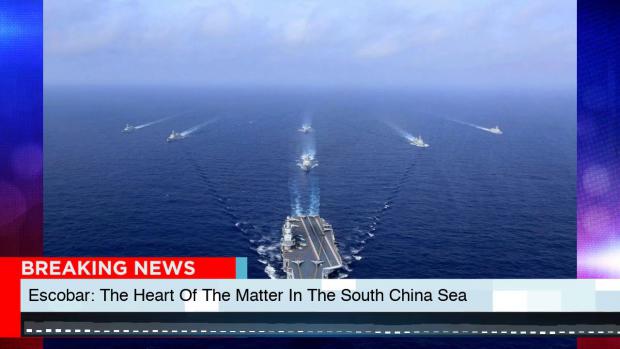 When the Ronald Reagan and Nimitz carrier strike groups recently engaged in "operations" in the South China Sea, it did not escape to many a cynic that the US Pacific Fleet was doing its best to turn the infantile Thucydides Trap theory into a self-fulfilling prophecy.

The pro forma official spin, via Rear Adm. Jim Kirk, commander of the Nimitz, is that the ops were conducted to "reinforce our commitment to a free and open Indo-Pacific, a rules-based international order, and to our allies and partners".

Nobody pays attention to these clichés, because the real message was delivered by a CIA operative posing as diplomat, Secretary of State Mike "We Lie, We Cheat, We Steal" Pompeo: "The PRC has no legal grounds to unilaterally impose its will on the region", in a reference to the Nine-Dash Line. For the State Dept., Beijing deploys nothing but "gangster tactics" in the South China Sea.

Once again, nobody paid attention, because the actual facts on the sea are stark. Anything that moves in the South China Sea – China's crucial maritime trade artery – is at the mercy of the PLA, which decides if and when to deploy their deadly DF-21D and DF-26 "carrier killer" missiles.

There's absolutely no way the US Pacific Fleet can win a shooting war in the South China Sea.

A crucial Chinese report, unavailable and not referred to by Western media, and translated by Hong Kong-based analyst Thomas Wing Polin, is essential to understand the context.

The report refers to US Growler electronic warplanes rendered totally out of control by electronic jamming devices positioned on islands and reefs in the South China Sea.

According to the report, "after the accident, the United States negotiated with China, demanding that China dismantle the electronic equipment immediately, but it was rejected. These electronic devices are an important part of China's maritime defense and are not offensive weapons. Therefore, the US military's request for dismantling is unreasonable."

"On the same day, former commander Scott Swift of the US Pacific Fleet finally acknowledged that the US military had lost the best time to control the South China Sea. He believes that China has deployed a large number of Hongqi 9 air defense missiles, H-6K bombers, and electronic jamming systems on islands and reefs. The defense can be said to be solid. If US fighter jets rush into the South China Sea, they are likely to encounter their 'Waterloo.'"

The bottom line is that the systems – including electronic jamming – deployed by the PLA on islands and reefs in the South China Sea, covering more than half of the total surface, are considered by Beijing to be part of the national defense system.

I have previously detailed what Admiral Philip Davidson, when he was still a nominee to lead the US Pacific Command (PACOM), told the US Senate. Here are his Top Three conclusions:

1) "China is pursuing advanced capabilities (e.g., hypersonic missiles) which the United States has no current defense against. As China pursues these advanced weapons systems, US forces across the Indo-Pacific will be placed increasingly at risk."

3) "China is now capable of controlling the South China Sea in all scenarios short of war with the United States."

Implied in all of the above is the "secret" of the Indo-Pacific strategy: at best a containment exercise, as China continues to solidify the Maritime Silk Road linking the South China Sea to the Indian Ocean.