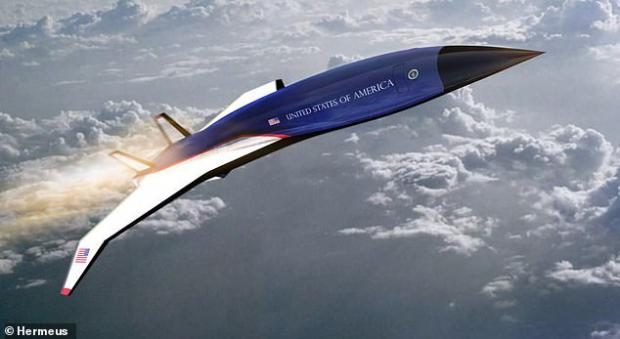 The contract, announced by aerospace firm Hermeus on Thursday, will fund the development of a small passenger jet that could replace the Gulfstream-based planes currently in the presidential fleet.

Though the current aircraft under consideration would be too small to replace Air Force One, it could conceivably someday be used to transport Cabinet members, Congressional delegations, and other officials whose transport is overseen by the Special Air Mission.

The Air Force investment, awarded through AFWERX, is worth $1.5 million and will be used to evaluate potential hypersonic military transports for an aircraft seating nine to 19 people, according to Aviation Week Defense Editor Steve Trimble.

At Mach 5, which is over 3000mph, flight times from New York to London would be 90 minutes rather than seven hours.

'Leaps in capability are vital as we work to complicate the calculus of our adversaries,' said Brigadier General Ryan Britton, Program Executive Officer for Presidential and Executive Airlift in a statement on the program.