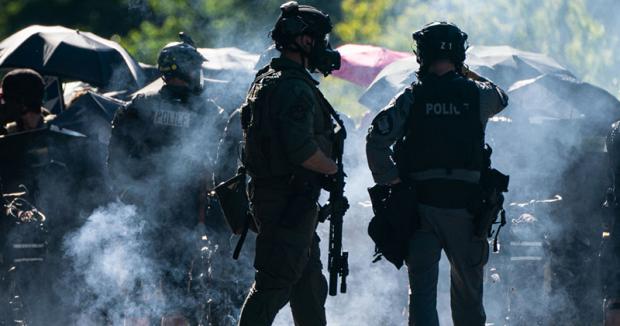 Antifa agitators have filed a lawsuit against the City of Seattle, claiming that a heavy handed police response to "protests" has forced the group to invest in more expensive riot gear.

KIRO 7 News reports that Antifa is complaining that police use of blast balls, sponge rounds, pepper spray, and other crowd control methods has meant the rioters have had to buy "expensive" protective gear.

"Because the Seattle Police Department has acted above and outside the law in dispensing its unbridled force, and the City has failed to prevent same, the government effect is to establish a de facto protest tax," the lawsuit claims.

"Individual protesters subjected to SPD's unabated and indiscriminate violence now must purchase cost-prohibitive gear to withstand munitions – even when peacefully protesting – as a condition to exercising their right to free speech and peaceable assembly," lawyers also suggest.

"The continued misuse of war munitions by SPD against civilians turns the streets – a public forum and site of protest – into a pay-to-protest racket where only a privileged few who are wealthy enough or popular enough to crowdsource funds to purchase gear akin to that used by the police department they fund can truly be in the streets," the lawsuit continues.

Police declared a previous "protest" on July 25th by the Antifa members as a riot.