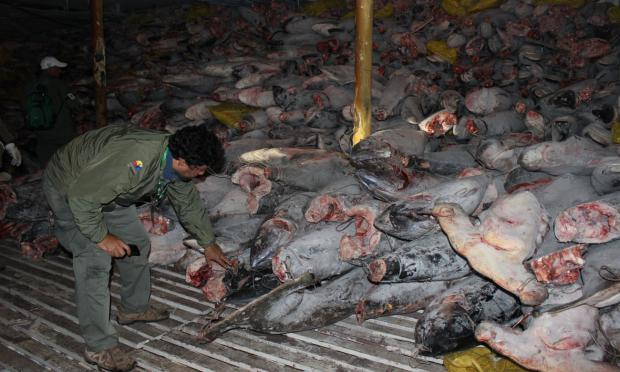 Jonathan Green had been tracking a whale shark named Hope across the eastern Pacific for 280 days when the satellite transmissions from a GPS tag on her dorsal fin abruptly stopped.

It was not unusual for the GPS signal to go silent, even for weeks at a time, said Green, a scientist who has been studying the world's largest fish for three decades in the unique marine ecosystem around the Galápagos Islands.

But then he looked at satellite images in the area where Hope was last tracked – more than a thousand nautical miles west of the islands – and noticed the ocean was being patrolled by hundreds of Chinese fishing boats.

"I began to look into it and found that at the very end of her track she began to speed up," said Green, co-founder and director of the Galápagos Whale Shark Project.

"It went from one knot to six or seven knots for the last 32 minutes – which is, of course, the speed of a fishing boat," he said.

The fishing vessels that Green saw on the satellite images are believed to belong to an enormous Chinese-flagged fleet which Ecuadorian authorities last week warned was just outside the Galápagos Islands' territorial waters.

"I don't have proof but my hypothesis is that she was caught by vessels from the same fleet which is now situated to the south of the islands," Green told the Guardian. She is the third GPS-tracked whale shark to have gone missing in the last decade, he added.