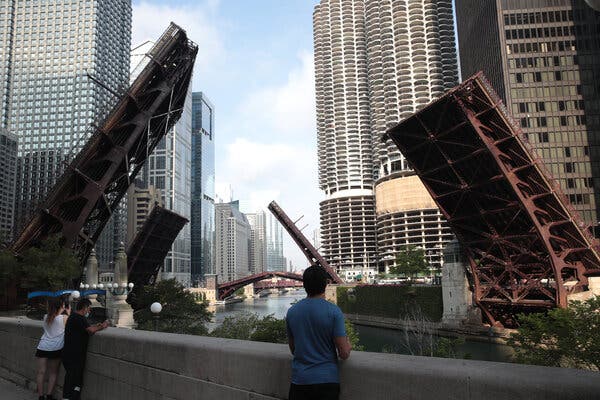 Videos that were circulating on social media captured the early morning scenes of hundreds of people in the streets, dozens of police officers, looting and confrontations with the police. There was also an exchange of gunfire with the police in the downtown, according to a police spokesman, Tom Ahren. He said on Twitter early Monday that there were "shots fired at police who returned fire," and that no officers were injured. He said it was "unknown at this time if offenders were shot."

In some of the videos, people can be seen entering various businesses, and local TV stations showed storefronts vandalized, windows smashed and sidewalks littered with boxes. In one widely viewed recording of the protests, police officers can be seen confronting a group of people in the street when someone hurled an object at one of the officers, striking him in the face. He and other officers then charged the people, who fled.

A police spokeswoman said on Monday that the details of the overnight violence, including any arrests and damage, would be announced at 8 a.m. local time by the police superintendent, David Brown, and by the city's mayor, Lori Lightfoot. The mayor's office was not available to comment early on Monday.

The Chicago Transit Authority said Monday morning that at least half a dozen bus and train lines were shut down "at the request of public safety officials."

The city's Office of Emergency Management and Communications alerted residents of street closures early Monday morning due to the police activity.