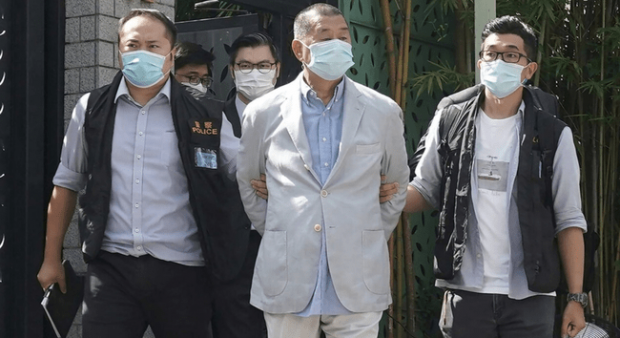 One day after Hong Kong police arrested media Tycoon Jimmy Lai, who holds British citizenship as well, the stock of Next Digital, Lai's media company which owns Apple Daily, HK's most popular daily newspaper, and a frequent thorn in the side of the CCP.

After arresting Lai in April over allegations he fueled last year's pro-democracy unrest, police arrested him again yesterday in the first major arrest tied to the new national security law. The arrest of Lai, his sons and other pro-democracy figures, including youth activist Agnes Chow, who was released from jail on Tuesday. The arrests prompted Secretary of State Pompeo and top UK diplomats to denounce the latest "disturbing" strike against the freedoms ensconced in the "Basic Law".

But now that flooding into the streets in protests carries too much risk for the average Hong Konger (who is now facing COVID and laws conflating dissent with terrorism), many have found an interesting and innovative way to support the pro-democracy movement: buying shares in Next Digital, the parent company of "Apple Daily".

After shedding 20% of its value yesterday, Next Digital has surged on a flood of mom and pop orders.

In just one day, the stock rose 4x from peak to trough...