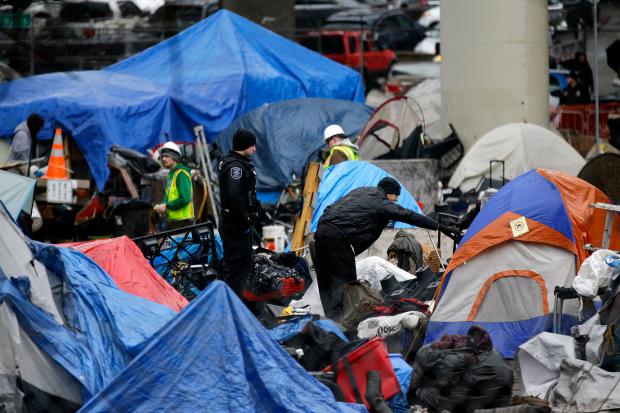 Exasperated residents of Manhattan's Chelsea district say they are tired of complaining to the authorities about a sprawling homeless camp that has taken root in their midst.

Around 20 people are believed to be living along West 24th Street, on the corner with Sixth Avenue, The New York Post reported. The camp is one block from the landmark Flatiron Building and Madison Square Park.

Bill de Blasio, mayor of New York, promised three weeks ago to resolve the depressing scene but nothing has been done, and locals told the paper that they were fed up.

On July 23 he said he would do 'whatever it takes' to 'have it addressed right away', but the camp has only grown.

It comes as more than 13,000 homeless people settle into hotels across the city after being removed from homeless shelters to prevent COVID-19 outbreaks.

Now, they are living in some luxury hotels in the Garment District and Upper West Side and are terrifying residents. De Blasio says they'll stay there until there's a vaccine which could be another six months.

There are also fewer police on the streets since de Blasio and the city council cut the NYPD's budget by $1billion in response to pressure from BLM activists last month. Many wealthy residents have fled their homes in fear, taking their disposable income and tax dollars with them. De Blasio waved them off, calling them 'fair weather friends' who will be replaced.