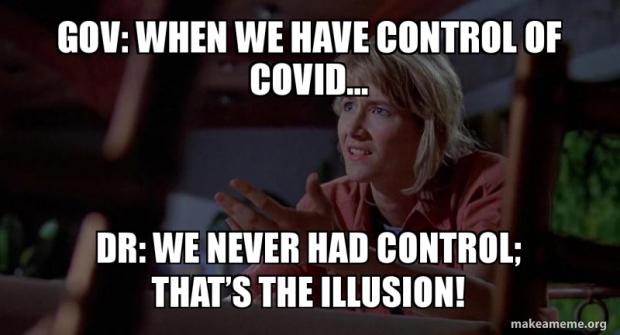 This article is based on my study and investigation of so-called epidemics over the past 30 years.

In the case of COVID-19, I've written at least one piece covering, in detail, each main element of the illusion. Here, I'm laying out the pattern. It is the same for each fake epidemic.

ONE: Through many meetings, exercises, planning sessions, a structure is welded in place to promote and launch the IDEA of an epidemic. World Health Organization, CDC, influential public health officials attached to governments around the world, etc.

TWO: There is a purported incident. An outbreak. The most obvious cause is intentionally overlooked. For example, horrendous air pollution, or the grotesque feces and urine pollution on a giant commercial pig factory-farm. Instead, the world is told a new virus has been found. Local researchers, if any, are augmented by researchers from CDC, WHO.

THREE: There is no air-tight chain of evidence explaining exactly how the purported new virus was discovered. From details released, there is NO proof of discovery by convincing methods, no proper unified study of MANY supposed epidemic patients.

FOUR: But WHO/CDC tells the world this is an epidemic in the making, caused by the new virus. The promotion and propaganda/media apparatus moves into high gear. Ominous pronouncements.

FIVE: Diagnostic tests for the unproven new virus are rolled out. They spit out false "proof" of "infection" like coins from a jackpot slot machine. These false-positives are an inherent feature of the tests.

SIX: Thus, all case numbers and death numbers, which are based on the tests, are rendered meaningless. And…they were already meaningless, because the supposed new virus "being tested for" was never properly discovered in the first place.

SEVEN: Nevertheless, these tests (plus useless eyeball diagnosis) are used to build official reports on case numbers. For the duration of the "epidemic," reports keep coming, and escalating numbers are trumpeted. Within the basically meaningless structure of these reports, there is fiddling with totals, to make them more impressive and frightening.

EIGHT: Real people are really getting sick and dying, but for the most part, they are people who are dying from traditional and long-standing conditions—flu-like illness, pneumonia, other lung infections, etc. These people are "re-packaged" under the new epidemic label—e.g., "COVID". The official description of the "new epidemic disease"—the clinical symptoms—is sufficiently general to easily allow this re-packaging.

NINE: If there is new illness, it can be explained by causes having nothing to do with the purported new virus. For example, a toxic vaccine campaign. A highly destructive drug. Highly toxic pesticides.

TEN: Over time, the definition of the epidemic is arbitrarily widened to include more symptoms and clinical features, in order to inflate case numbers.

REVEALED: 26 out of the 27 Lancet scientists who trashed theory that Covid leaked...