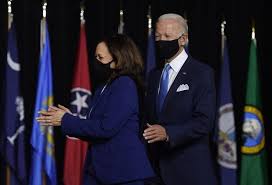 Reacting to the racial rage that erupted after the death of George Floyd under the knee of a white Minneapolis cop, Biden reacted again. He put out word he would be looking closely for a Black woman to run with.

Thus did Joe paint himself into a corner.

For there was no Black female governor of any state in the Union, and there was only one Black woman in the U.S. Senate — Kamala Harris.

This presented a problem. For in the first debate, Harris had charged Biden with colluding with segregationist senators in the '70s to block the busing of school children for racial balance.

Harris introduced the toxic charge against Biden with this sweet upfront concession: "I don't believe you are a racist."

This Tuesday, Biden made a virtue out of necessity.

He chose Harris to run with him. And did so just one day after receiving a letter from 100 prominent Black men led by rapper Sean "Diddy" Combs and radio host Charlamagne tha God that read like an ultimatum.