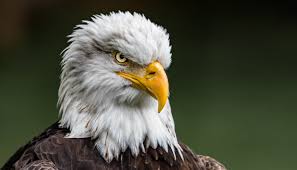 A bald eagle attacked and destroyed a government drone that was flying 162ft over Michigan.

The bird of prey tore the propeller from the $995 Phantom 4 Pro Advanced quodcopter which sent the drone plummeting to the bottom of Lake Michigan.

Environmental quality analyst and drone pilot Hunter King had been mapping shoreline erosion with the device near Escanaba, in Michigan's Upper Peninsula, at the time of the July incident.

He pressed the button to recall the device and saw the drone make its journey back to him from his video feed,

But the eagle attacked the drone mid-flight, when it was travelling at 22mph, causing the aircraft to careen uncontrollably.

The drone sent 27 warning notifications in the 3.5 seconds that it took to spiral to the water, including one noting that a propeller was missing.

A couple bird-watching nearby told King they saw the eagle strike something in the air.

The bird appeared to fly away without any obvious injuries, department officials said.

Mapping data revealed the drone landed 150ft offshore in four feet of water, but officials were unable to recover the device.

The Department of Environment, Great Lakes, and Energy confirmed the incident.