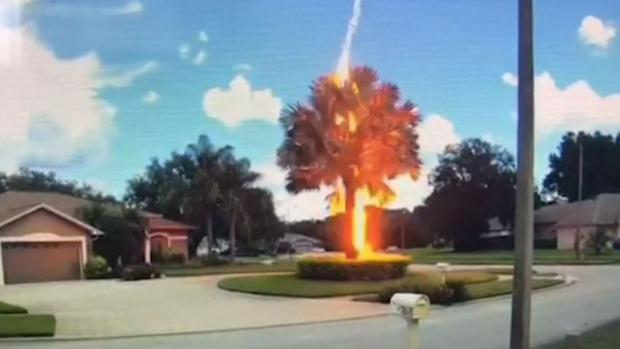 This is the moment a fork of lightning struck a palm tree - despite clear blue skies above in Florida.

The footage was captured from the inside of a Florida man's car, while he was around 75ft away from the strike.

Johnathan Moore was hard at work in suburban Tampa when the bolt struck the palm tree.  An eruption of thunder can be heard in the video before the lightning tears through the top of the tree.

Storms had been expected on the day of the footage, but unlike usual lightning strikes, this struck in broad daylight.

The occurrence, referred to as a 'bolt from the blue' by meteorologists, can travel several miles from thunderstorm clouds. They then angle downward before striking into the earth.

Moore, whose dashcam recorded the footage, said he saw the unusual strike as an opportunity to warn others to be on alert.

The central Florida peninsula has the highest lightning concentration in the U.S, NBC reported, citing the National Weather Service.

Peak lightning season in the peninsula happens between May and October, from midday to midnight.