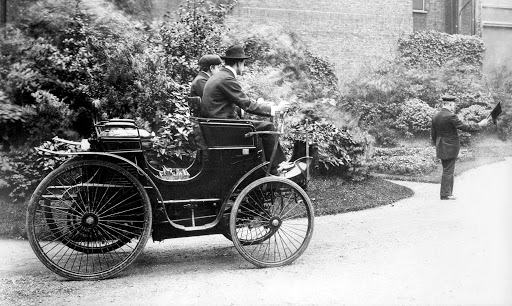 People who know it is a psychosis are social-pressured to comply with such outrages as being expected (and increasingly required) to dress up as if it were Halloween every day for reasons that are exactly the same in principle as driving their car no faster than 5 MPH with the flashers on at all times because someone fears "speeding" cars. That they might get run over – or run into – if cars were allowed to go any faster.

Such neurotics temporarily got their way more than 100 years ago, when the first cars appeared and threatened the delicate nerves of the velocity averse.

The Red Flag Acts (including the Highways and Locomotive Act of 1878) imposed a 4 MPH maximum speed limit in the country – 2 MPH in the city –   and required that the vehicle be preceded by a man walking at least 60 yards ahead of it waving a red flag to warn all in the path of the vehicle that it was coming . . . very slowly.

They got their way again in the early '70s, when the maximum lawful highway speed – which had risen to an alarming (to the velocity-averse) 70-75 MPH – was temporarily throttled back to 55 MPH. This was initially presented to a public terrorized by propaganda about artificial fuel scarcity as a necessary fuel conservation measure that oleaginously morphed into a saaaaaaaaaafety measure . . . very much as "flattening the curve" greasily morphed into "stopping the spread," the latter having no end.

The common denominator being the weaponization of fear.

The difference being that the velocity averse were overruled by those who wanted to get places in hours rather than days and minutes rather than hours and – the key thing – rejected the neurotics' assertion that their fear of movement gave them the moral right to restrict it so absurdly or even at all.