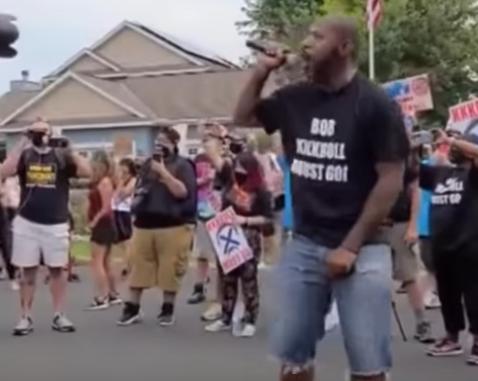 One leader of the aggressors was Democrat politician John Thompson, who recently won the primary for a Democrat seat in the Minnesota House and was endorsed by Governor Walz. Thompson shrieked obscenities and threatened locals with burning down the town saying, "I didn't come here to be peaceful."

[Americans by now must be aware of a common scenario: Politicians and law-enforcement officials stand down and do nothing to interfere with violent professional mercenaries as they destroy property and threaten lives. Even though everyone knows that many of these politicians and strike forces are financed by George Soros, no one in government, local or national, does anything to put him out of business. The destroyers seldom face serious penalties, but their victims are prosecuted for defending themselves. Conclusion: There are not two sides in this conflict. Both sides are serving the same master who wants escalation of violence to the point where the population will beg for martial law. How else can you trick Americans to gratefully accept their own enslavement?] -GEG

The "protest" was meant to intimidate the family and neighbors of Bob Kroll, president of the Minneapolis police union.

One leader of the demonstration was Democratic politician John Thompson, who recently won the primary for a safely Democratic seat in the Minnesota House. Thompson shrieked obscenities at community members, declaring that the "f***ing Grand Wizard [of the Ku Klux Klan]" lived in the town:

At another point in his tirade, Thompson threatened the locals, screaming "You think we give a fuck about burning Hugo down?" and "I didn't come here to be peaceful." He also said that "blue lives [i.e. police] don't mean shit to black people."

Thompson was recently endorsed by Minnesota governor Tim Walz, who said "His fierce advocacy and commitment to his community is exactly what's needed in the state legislature right now."

Thompson's behavior would seem to run afoul of Minnesota's law against disturbing the peace, which among other things prohibits "Inciting violence by using offensive language in public or by shouting."

the town people allowed this to happen. They could of stood up to them and drove them out of town like other communities did. They were clearly breaking the law by threating them. Maybe there is something to say about old fashion buckboards, tar and feathering.