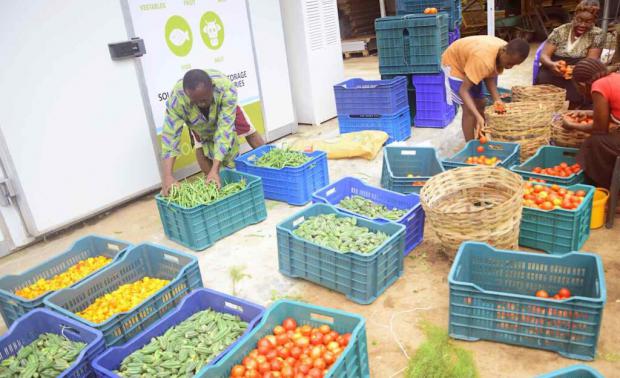 One of the great inventions in human history, refrigeration is being brought to rural fish and produce markets in Nigeria through an entrepreneur's invention of 100% solar-powered walk-in cold storage rooms.

which use transformative technology that, like all great innovations, tackles several problems at once.

Around 6,000 tons of fish are harvested every day on the rural Nigeria side of the Niger Delta, but due to the tropical climate only 2,000 tons of fish are sold fresh. The story is the same for fruits and vegetables, which on average can survive a maximum of only two days in the West African nation's heat and humidity.

Designed specifically for off-grid areas, ColdHubs employ rooftop solar panels to generate enough electricity to power the units in all weather conditions, while providing reliable 24/7 autonomous refrigeration. This cuts down on spoilage, but also leads to much higher profits.

A bag of fresh bonga fish should in theory fetch between $20 and $40, but without storage facilities, fishermen either sell the same bag for much less to avoid spoilage, or they smoke or dry the fish and sell it days later—while accepting much less due to the higher value and demand that fresh fish commands.