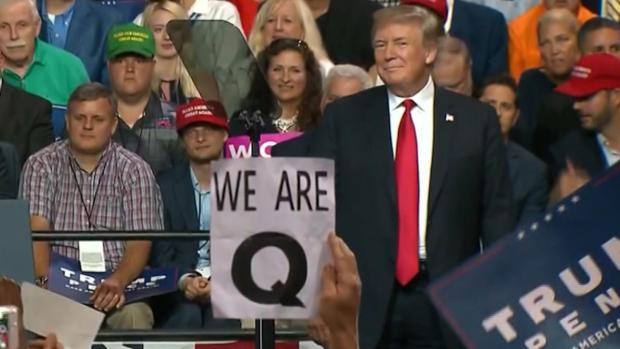 WASHINGTON (AP) — President Donald Trump on Wednesday praised the supporters of QAnon, a convoluted, pro-Trump conspiracy theory, and suggested he appreciates their support of his candidacy.

Speaking during a press conference at the White House, Trump courted the support of those who put stock in the conspiracy theory, saying, "I heard that these are people that love our country." It was Trump's first public comment on the subject and continued a pattern of president appearing unwilling to resoundingly condemn extremists who support his candidacy.

QAnon has ricocheted around the darker corners of the internet since late 2017, but has been creeping into mainstream politics more and more. The baseless theory centers on an alleged anonymous, high-ranking government official known as "Q" who shares information about an anti-Trump "deep state" often tied to satanism and child sex trafficking.

Trump insisted he hadn't heard much about the movement, "other than I understand they like me very much" and "it is gaining in popularity."

Trump has retweeted QAnon-promoting accounts, and shirts and hats with QAnon symbols and slogans are not uncommon at his rallies.

Trump's comments were condemned by the campaign of his Democratic rival, former Vice President Joe Biden.

"After calling neo-Nazis and white supremacists in Charlottesville 'fine people' and tear gassing peaceful protesters following the murder of George Floyd, Donald Trump just sought to legitimize a conspiracy theory that the FBI has identified as a domestic terrorism threat," said Biden spokesman Andrew Bates. "Our country needs leadership that will bring us together more than ever to form a more perfect union. We have to win this battle for the soul of our nation."

Pressed on QAnon theories that Trump is allegedly saving the nation from a satanic cult of child sex traffickers, Trump claimed ignorance, but asked, "Is that supposed to be a bad thing?"