(NOTE: Air Guns are NOT toys. When used improperly, an air gun can cause serious bodily harm or even death. Treat with proper respect and safety as one would of any firearm. Remember and practice the rules of firearm safety at all times.)

Recently, I have read more than a few people talking about the availability of ammunition or lack thereof and the ubiquitous training round, the .22LR rim fire.

For your consideration: Air rifles/pistols.

Air rifles and pistols exercise all the same fundamentals of marksmanship, just at shorter ranges and can even be used for hunting. In light of more than a few ranges being closed due to COVID-19, a number of air guns are backyard friendly. No hearing protection required, but as always, eye protection. Your neighbor will not even be aware you are shooting.

But safety first! You are responsible for every shot taken. Know where the pellet is going to go. Have a backstop with sufficient stopping power.

The Break Barrel – The barrel is used to compress either a coiled spring or a gas spring. The effort to compress the piston can vary from easy to requiring a degree of strength. Some manufactures will list this effort, called "cocking effort," in pounds. The pellet is loaded and then the barrel is returned to the firing position. When the trigger is squeezed, the spring is released, drives a piston into a compression chamber and the air is then forced into a transfer port to the barrel and sending the pellet down range. 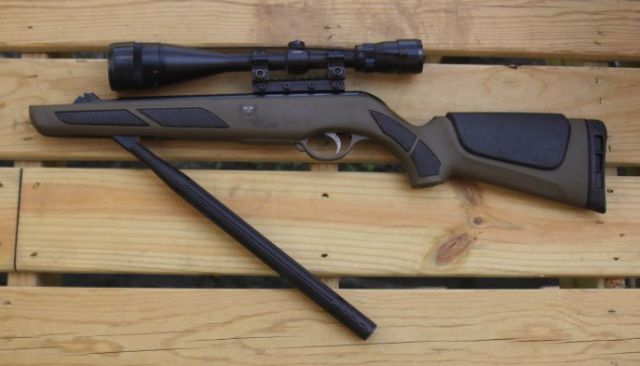