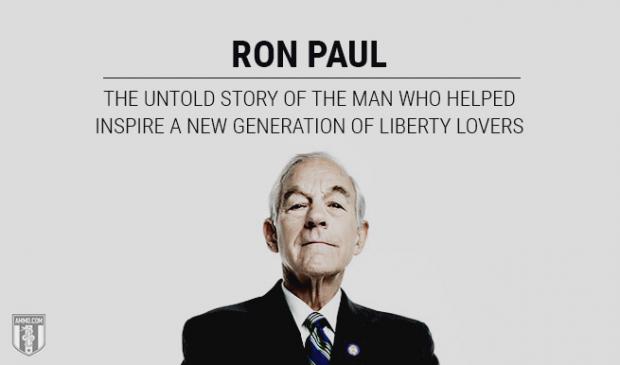 If you're under the age of 40 and you're reading this, chances are very good that your interest in the liberty movement was sparked by three-time presidential candidate and veteran Texas Congressman Ron Paul. Paul inspired an entire generation of Libertarians, Constitutionalists and limited-government Conservatives with his 2008 and 2012 presidential campaigns.

It might surprise you to learn that Paul is not originally from Texas, but Pittsburgh, where he was born to a dairy farmer and his wife. He graduated from Gettysburg State College in 1957, with a degree in biology. He earned his medical degree from Duke's School of Medicine in 1961. From 1963 to 1965, he was a flight surgeon in the United States Air Force, before moving over to the Air National Guard from 1965 to 1968. Upon discharge, he relocated to Texas to start a private practice in obstetrics and gynecology.

While he had been reading Austrian economics and Libertarian political philosophy for years beforehand, he finally decided to run for Congress when President Richard Nixon took the nation off of the gold standard in 1971. He lost his first attempt at public office in 1974, but won a special election in 1976, losing the regular election later that year by a mere 300 votes. He defeated his opponent in 1978, serving until 1985, then again from 1997 to 2013.

While in Congress, Paul spoke in favor of a return to the gold standard with Senator Jesse Helms, as well as against a reinstatement of the draft favored by President Jimmy Carter and the majority of Republicans in Congress.

He retired from Congress in 1984 to run for Senate, losing the Republican primary to Phil Gramm.

After his time in Congress, he focused on the private promotion of liberty, publishing the Ron Paul Survival Newsletter and the Ron Paul Freedom Report with Lew Rockwell, who had previously been his congressional chief of staff. He also sold precious metals under the auspices of Ron Paul Coins.

In 1988, he made his first run for the presidency as a Libertarian, defeating Native American activist Russell Means (who had previously seconded Larry Flynt in his bid for the Libertarian Party line) and coming in third nationwide. He considered running again in 1992, but instead decided to back Pat Buchanan's campaign against President George H.W. Bush.

Coming Back to Congress

Paul returned to Congress after a 1996 election with a huge assist from friends Nolan Ryan, Steve Forbes, and Pat Buchanan.

However, it was his 2008 presidential campaign that began to change the world of liberty. There is arguably no one more responsible for the spread of the liberty movement than Ron Paul, whose 2008 campaign electrified young people who would likely have largely been Democrats previously. The average Ron Paul supporter in 2008 was not the country club Republican or movement Libertarian one might have pegged, but more likely to be a tech-savvy college kid than anything else.