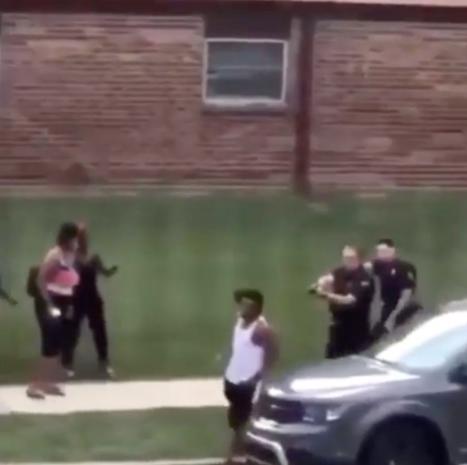 An unarmed black man was shot in the back seven times by a white police officer in front of his children after Wisconsin police were called to a domestic dispute yesterday.

Rioting and looting erupted in the wake of the shooting as the County of Kenosha declared a state of emergency, and a curfew has been put into effect by authorities until 7am on Monday.

Jacob Blake, 29, was rushed to hospital following the shooting in Kenosha that prompted neighbors and crowds to gather and confront officers at the scene on Sunday night. Early Monday, family members posted that Blake was in a stable condition at the ICU in Froedtert Hospital, Milwaukee.

Wisconsin Governor Tony Evers issued a statement denouncing 'excessive use of force' by police. As video of the shooting quickly went viral, protesters took to the streets of Kenosha, where police are on high alert.

Demonstrators set fire to vehicles and smashed police cruiser windows as they faced off with police, who set off tear gas canisters to try to disperse the crowd.