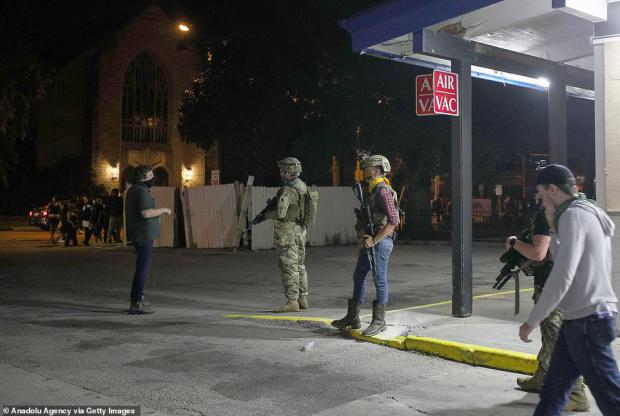 In footage taken by a local reporter, a small group of men can be seen carrying rifles and wearing combat gear as they protect local shops. They deny they are part of a militia.

The Wisconsin city became the nation's latest flashpoint in a summer of racial unrest after police shot unarmed black man Jacob Blake, 29, in the back Sunday.

The shooting occurred three months after the death of George Floyd in Minneapolis sparked nationwide protests against police brutality and racism.

One of the armed men in the footage taken Monday night says: 'They're destroying their own neighborhood. It's not the civilians. Go f*** up the government that just killed your man. Don't f*** up your neighbors.

'I'm on your side but you can't burn down your local businesses.'

Kenosha County Board of Supervisors member Zach Rodriguez said the board would hold an emergency meeting on Tuesday on seeking federal help, such as U.S. Marshals Service officers, to quell the unrest after some 300 rioters looted businesses and set fire to buildings overnight.

'Essentially, our city was burned to the ground, building by building,' Rodriguez told Reuters. 'Enough is enough.'

Firefighters from about 30 fire departments around the region came to Kenosha to help put out the blazes across swaths of the city.