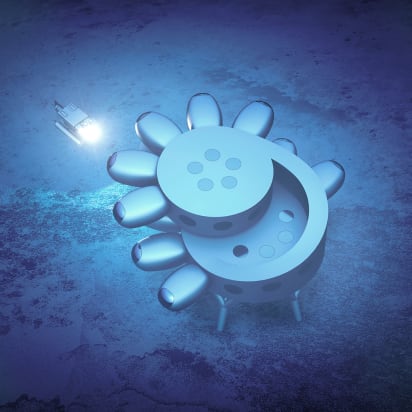 Inspired into action by the limitations observed after a month-long stay in the only remaining underwater research station, the Aquarius Reef Base off the coast of the Florida Keys, his new project would create the first modern undersea research base in over 30 years.

Called Proteus, it would be 4,000 square feet—a space ten times that of Aquarius, and one where biology and oceanography research would blend with climate and even pharmaceutical sciences to help create a more modern understanding of our oceans.

Fabien is every inch his father and grandfather. An oceanographer, environmental advocate, and "aquanaut," he learned the invented trade of his grandfather—scuba diving, when he was only four years old. Yet Fabien, now 52, is fed up with the limits of scuba as a research tool.

Confronted with the restrictions of time and depth, he sees Proteus as a chance to "have a house at the bottom of the sea, [where] we're able to go into the water, and dive 10 to 12 hours a day to do research, science, and filming."

ISS of the Ocean

Proteus, named after the old Greek god of rivers and oceans, would sit 60 feet down off the coast of Curaçao, the island in the Lesser Antilles. Architect and industrial designer Yves Béhar and Fabien are looking to raise $135 million for construction.