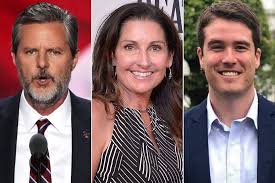 Reuters has published an article alleging that a former business partner of Liberty University President Jerry Falwell Jr. had a years-long affair with the "evangelical power couple." Giancarlo Granda, 29, claims to have had an affair with Falwell's wife Becki that spanned seven years — an affair that Jerry was allegedly fully aware of and participated in by watching his wife engage in sex with Granda.

According to Reuters, Granda provided evidence in the form of emails, text messages, and video chats to back up his claims. Reuters reached out to the Falwells, whose lawyer responded by saying that Jerry "categorically denies everything you indicated you intend to publish about him." However, the day prior to Reuters' release of the story, Jerry issued a statement that his wife did indeed have an affair, though he asserted that he was not a party to it. He further claimed Granda had been trying to extort money from the Falwells.

It was then announced that Falwell, who took an indefinite leave of absence earlier this month over a provocative photo of himself with a young woman, was resigning as the president of Liberty. Yet on Monday evening, Falwell disputed the announcement, insisting that he was not leaving his post. Even if Granda's allegation that Jerry was a party to the affair is false, the Falwells have confessed to enough troubling behavior that the right thing for Jerry to do is resign. A group of more than 50 pastors last week requested that Liberty's board of trustees "permanently remove" Falwell from leadership, arguing that his behavior has brought shame to the university and was a failure "to uphold a positive witness for the name of Christ." Indeed.