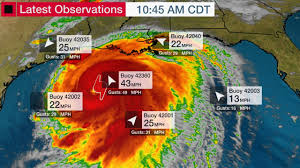 The storm's winds, which were now 125 mph but could reach 145 mph, will be devastating but the expected storm surge is also likely to be a disaster, with the National Hurricane Center issuing this blunt message as part of its 11 a.m. Wednesday public advisory:

"Unsurvivable storm surge with large and destructive waves will cause catastrophic damage from Sea Rim State Park, Texas, to Intracoastal City, Louisiana, including Calcasieu and Sabine Lakes," the hurricane center said. "This storm surge could penetrate up to 30 miles inland from the immediate coastline in southwestern Louisiana and far southeastern Texas."

The surge, or the inundation of water pushed inland from a storm, could reach as high as 20 feet in some areas, forecasters said.

The 11 a.m. advisory also said that Laura "continues to rapidly strengthen" and is expected to intensify to an "extremely dangerous Category 4 hurricane." A Category 4 forms when winds are in range of 130 to 156 mph. They obliterate much if not everything in their path, cause power outages that could last weeks or months, and leave areas uninhabitable for weeks and months, the hurricane center said.

"Some areas, when they wake up Thursday morning, they're not going to believe what happened," Stacy Stewart, a senior hurricane specialist, told the Associated Press.