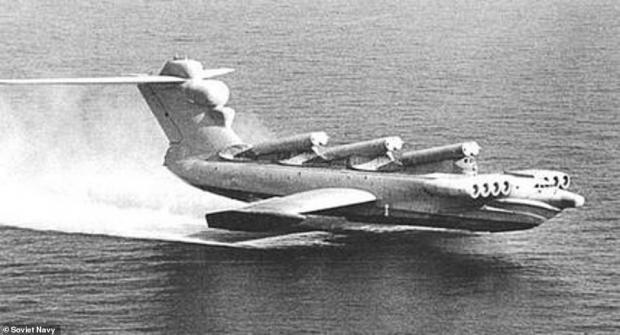 These jaw-dropping aerial and internal shots show a top-secret Soviet military craft bigger than a jumbo jet lying abandoned on a beach where it will be converted into a museum.

The futuristic-looking MD-160 Lun-class ekranoplan was towed by tug across the Caspian Sea last month as part of a 14-hour journey from Kaspiysk naval base to Derbent, Dagestan.

The non-operational ground-effect vehicle, which was designed by Rostislav Evgenievich Alexeyev in 1975, used a cushion of air beneath its wings to speed above the sea's surface at 13ft making it difficult for enemy forces to detect.

It had been sitting unused at the naval base since it was retired in the late 1990s but it has now been beached amid plans to turn it into an ocean-side tourist attraction.

The MD-160, also known as an Utka, is bigger than a 747 jet and was built as part of the Soviet WIG programme, which dates back to the Cold War 1960s.

It is the only Lun-class ekranoplan model to be completed and was equipped with carrier-killing supersonic missiles.