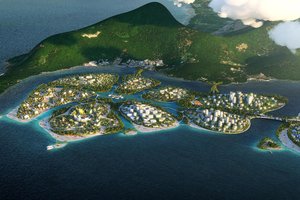 It envisions building three artificial islands in Malaysia that host housing, business and leisure facilities, and are powered by sustainable technology such as solar power and wind turbines.

Bringing to mind Denmark's plan to create nine new islands, the BiodiverCity proposal is slated for the south coast of Penang Island. The design was penned in collaboration with Hijjas and Ramboll, and was declared the winner of an international architecture competition held by Malaysia's Penang State Government.

The project would be huge and include 4.6 km (2.8 miles) of public beaches, 600 acres (242 hectares) of parks, and a 25 km (15.5 miles) waterfront. Mixed-use districts would host up to 18,000 residents, and there would be a focus on creating a pedestrian- and cyclist-friendly environment, with lots of public transportation available. Greenery would also be extensive, including green roofs and facades.

The first island to be built would be called The Channels. This would be centered around a 500 acre (202 hectare) "digital park," with sections for research, development and local businesses, as well as a family-oriented area with virtual reality and robotics attractions. Elsewhere would be a large wave pool, tech park, a government center, and a cultural area.