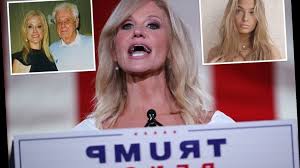 The 53-year-old said: "I was raised in a household of all women. They were self reliant and resilient. Their lives were not easy, they never complained, and money was tight.

"But we had an abundance of what mattered most - family, faith and freedom.

"I learned that in America, limited means does not make for limited dreams.

"The promise of America belongs to us all."

Conway - who has been a close adviser to the President since he was sworn into office in 2016 - explained how "for many of us, women empowerment is not a slogan."

She explained: "It comes not from strangers in social media or sanitized language in a corporate handbook.

"It comes from the everyday heroes who nurture us, who shape us, and who believe in us."

Conway was raised by her mother, her grandmother, Antoinette; and two aunts, she said in a cover story with New York Magazine.

She is first woman campaign manager of either major political party to win a presidential general election.

"This is a land of inventors and innovators, of entrepreneurs and educators, of pioneers and parents, each contributing to the success and future of a great nation and her people," Conway said in her RNC speech.