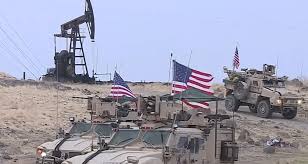 Near the end of July, one of the most important recent developments in U.S. foreign policy was quietly disclosed during a U.S. Senate hearing. Not surprisingly, hardly anybody talked about it and most are still completely unaware that it happened.

Answering questions from Senator Lindsey Graham, Secretary of State Pompeo confirmed that the State Department had awarded an American company, Delta Crescent Energy, with a contract to begin extracting oil in northeast Syria. The area is nominally controlled by the Kurds, yet their military force, the Syrian Democratic Forces (SDF), was formed under U.S. auspices and relies on an American military presence to secure its territory. That military presence will now be charged with protecting an American firm from the government of the country that it is operating within.

Pompeo confirmed that the plans for implanting the firm into the U.S.-held territory are "now in implementation" and that they could potentially be "very powerful." This is quite a momentous event given its nature as a blatant example of neocolonial extraction, or, as Stephen Kinzer puts it writing for the Boston Globe, "This is a vivid throwback to earlier imperial eras, when conquerors felt free to loot the resources of any territory they could capture and subdue."

Indeed, the history of how the U.S. came to be in a position to "capture and subdue" these resources is a sordid, yet informative tale that by itself arguably even rivals other such colonial adventures.