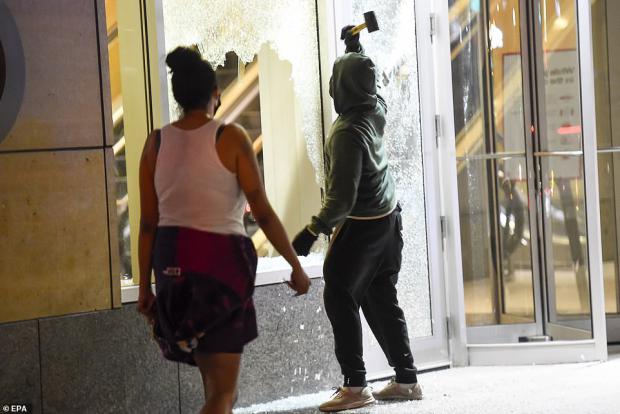 Minneapolis Police have shared footage of the moment a murder suspect saw police close in on him so he pulled out a gun and committed suicide.

Officers are seen approaching the man, wearing a white shirt, gray pants, a cap, and a black backpack, and a group of nearby people sitting raise their arms in surrender and run away.

When he sees the officers he turns his back towards them, takes out a gun and takes his own life.

Police removed the video from their social media Thursday and tweeted: 'Yesterday MPD posted a video in order to dispel rumors that caused significant public safety concerns for our city. After receiving feedback from the community, we have removed the video due to the graphic nature and out of respect to the individual, his family and the community.'

Mayhem and looting erupted in Minneapolis late Wednesday after false rumors spread that officers had gunned down the suspect.

The suspect, who has not yet been identified, and his female associate were in a parking garage where they encountered another man who they allegedly killed.

A confrontation ensued where the suspect with the woman shot the man who approached them, and the couple fled. The woman was taken into custody a short time later.