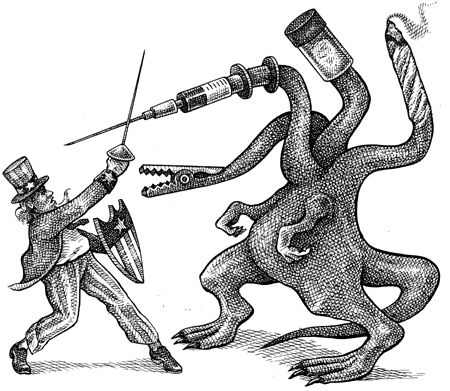 Back in 1991, a federal judge named William D. Keller sentenced these three men to 500 years in jail for a non-violent drug offense—i.e., laundering drug money.

Why, that's just plain stupid. Any lawyer that has gone to any decent law school knows that most people die before they are 200 years old. What law school did Keller attend?

Or maybe it's just plain vicious. Making known his intention to play a role in "winning" the "war on drugs," Keller, who was appointed to the bench by conservative President Ronald Reagan, declared, "I intend to deter forevermore anybody doing anything like this."

Wouldn't you love to ask the honorable Judge Keller how his draconian policy of deterrence has worked out for him? I mean, exactly how many people did he deter from engaging in drug-law violations with his 500-year jail sentences for those three men? Correct me if I'm wrong but there have been countless people engaging in the drug trade since 1991, when Keller imposed those 500-year jail sentences. Obviously, none of them was deterred by Keller's tyrannical jail sentences.

The fact is that Keller policy of deterrence accomplished nothing. All it did was ruin the lives of three men and their families. Even if a few people were deterred by his 500-year jail sentences, it didn't make any difference because there were more than enough people who were not deterred to ensure a plentiful supply of drugs for American drug consumers.