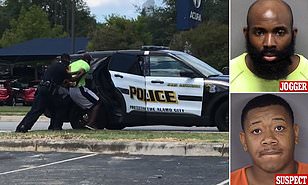 -Mathias Ometu, 33, was arrested by police for 'jogging while black' in San Antonio, Texas, on Tuesday

-Ometu, who was jogging at the time, refused to give officers his name and date of birth after they arrested him

-The victim told officers that Ometu was not the suspect, but he was still detained and charged with assault of an officer

A Texas man was forcefully arrested by law enforcement for 'jogging while black', witnesses said, as they searched for a different man believed to be involved in a nearby domestic violence incident.

Mathias Ometu, 33, spent two days in the Bexar County Jail after he was arrested by two San Antonio Police Department officers this week.

The department has since acknowledged that Ometu was not the suspect they were looking for, and the victim corroborated that fact, but he was still charged and taken into custody.