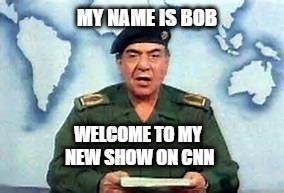 Ordinarily, this wouldn't be worthy of reporting three days later.

However, for some reason, this chyron was a bridge too far for many people, and the internet is still flooded with memes. It's apparent that, with this latest denial of objective reality, CNN has finally completed its transformation into Muhammad Saeed al-Sahhaf, whom many Americans remember almost fondly as Baghdad Bob, the Hussein regime propagandist who insisted that Saddam was winning even as U.S. troops entered Baghdad.

In 2003, when our military successfully invaded Iraq and quickly captured Baghdad, Muhammad Saeed al-Sahhafk, aka Baghdad Bob, was Saddam Hussein's Minister of Information. As troops neared and then entered Baghdad, al-Sahhaf gave daily press briefings during which he announced the most outrageous lies about the wars.

For example, Baghdad Bob insisted that American troops were committing suicide "by the hundreds" and that none had entered Baghdad. Meanwhile, Americans were a few hundred yards away from him, and the audience could hear the sounds of their fighting. On April 8, four days before Americans captured Baghdad, al-Sahhaf was still insisting that U.S. troops "are going to surrender or be burned in their tanks. They will surrender. It is they who will surrender."

10 Ways The Media Is Gaslighting You BY JULIA SONG·