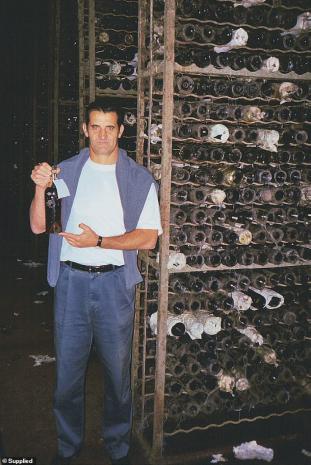 As a music promoter in the 1980s heyday of Australian pub rock John Baker helped bring chart-topping bands including Midnight Oil and Men At Work to the world.

When INXS first played his Vicar of Wakefield Hotel in Sydney's north-west Baker could only put them on Thursday nights because they didn't pull a crowd on weekends.

Michael Hutchence and his bandmates would go on to sells millions of albums around the globe but by then Baker had already moved on to another career.

As a fine wine merchant, he would unearth remarkable liquid gems and become embroiled in the search for one of the world's most valuable cellars.

Two decades ago Baker got a tip about a mythical wine collection said to have been assembled by the last tsar of Russia, and later fallen into the hands of Soviet dictator Josef Stalin.

His obsession with finding - and buying - this multi-million dollar cellar buried near a goldmine in Georgia would take him from Sydney's eastern suburbs to the former Soviet republic.

'Stolen from the Tsar, hidden from Hitler and found by a Sydney wine merchant,' the book's publicity blurb says.