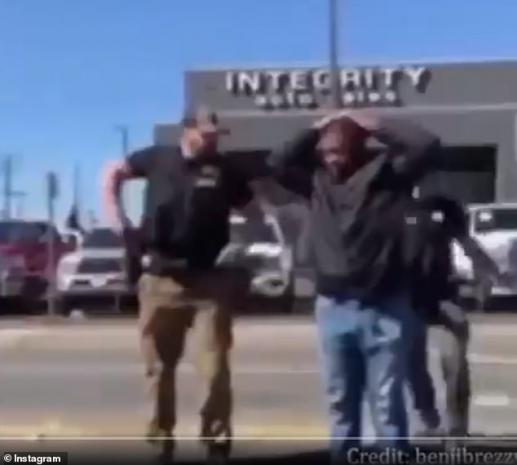 A black man in California was forcefully kicked in the back by a sheriff's deputy while his hands were above his head, witnesses said.

The Sacramento County Sheriff's Department launched an investigation into the March incident, but revealed on Friday that 'appropriate action' had been taken against the deputy.

Outrage over the shocking footage reignited this week after former NFL player Shannon Sharp shared the footage to his Twitter account.

'I thought all you had to do was comply and you wouldn't be shot or brutalized by police,' he wrote.

According to the original Instagram post, the unidentified man was 'minding his business' after eating Sunday brunch on March 11 when Sacramento law enforcement suddenly surrounded him.

Footage shows the man standing near an auto dealership with both his arms above his head as two deputies approach him.

One deputy appears to have drawn a Taser gun and deploys it at the man, who only flinches slightly and does not remove his hands from his head.

The same deputy then stands behind the man and, without warning, gives a forceful and unnecessary jump kick into the man's back.

The man turns around to question the deputies, but the second authority roughly wraps the man in a headlock.

1 Comments in Response to Deputy in California KICKS a black man who had his hands above his head during an arrest...

the kick was clearly unnecessary from what I see on the video as well as unprofessional.Now what happened to the police officer? Hopefully heavy fine and major retraining. What happened afterwords is almost never in story.