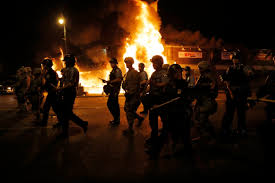 "We could end this by just killing anyone who sets foot on our block."

"All good Americans need to do is start mowing down protesters with their cars if the roads get blocked."

Chances are, if you ever read the comments or visit any type of social media outlet online, you've read some comments pretty similar to the ones above. After all, this is America, land of the free, home of the brave. It's up to all good patriots to defend our property and our country from scumbags with deadly force.

But not so fast.

Things are never as cut and dried as people with 3-second solutions like to make it seem in the comments.

You can't escalate directly to lethal force in every situation.

Let's take a look at the situation Terry Trahan wrote about the other day, where the lady was sitting in a restaurant having dinner when she got surrounded by an unruly mob who insisted she raise her fist in the air in support of a group of activists. The comments section is filled with people who are apparently ready to open fire on a city street into a crowd of people.

Is that really the appropriate response? While I absolutely agree that the behavior of that mob is horrible and that these things shouldn't happen, is this a moment that requires the use of uncensored deadly force?